Children of the Sun
​by Drew Townsend 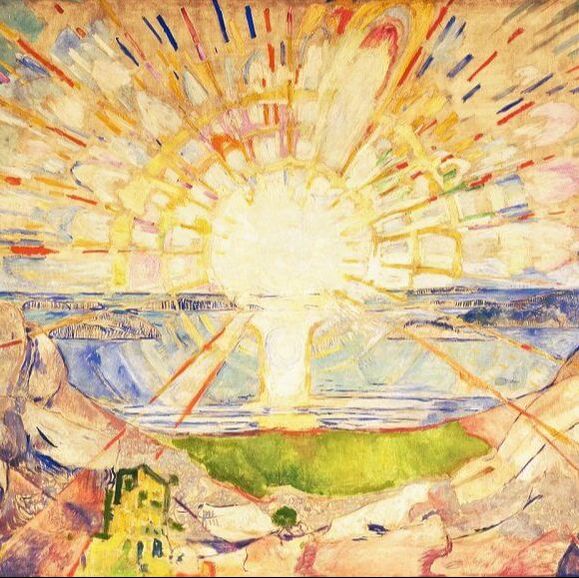 The Sun, Edvard Munch, 1909
For children of the sun, they wore their cheeks paler than most. But where was the sun in those days? They hid themselves from view, bleaching like cupboard-kept chicory, warmed under the incubator light of the arcade where they left peeling shells of themselves all over the geometric pattern of the carpet. People must have found little parts of them each year. Someone would gather them up, those finger-scrunched Haribo wrappers that shone inside with greasy smears of gelatine, those lip-gloss rimmed cans of fizzy juice left to air on the edge of the neon-bright flashing consoles. They would buy whole fish suppers and eat only the chips, toying with the flaking white flesh kept wet by the golden cocoon of batter too sharp for chapped lips. Throwing the remnants in the bin for the seagulls to fight over, never thinking of this as waste, neither the food nor the rubbish nor the hours spent in the dark.

Pretty little pair, them two.
They are, int they.
You think they’d be out with the other kids.
Are they related?
No, don’t think so.
Never see them with no one else.
Nice kids though, real little sweethearts.

Even when they did venture out they would sit in the grey curling lip of the revetment, hiding from the sun once more, the concrete wave breaking over them, sit and count each and every wooden rib of that long damp beach, every jewel encrusted groyne – their fingers sticky with calypso melt.

Strange little pair.
Who’s the father?
Just about anyone.
Ha.

As they grew, they swapped the sweets for cigarettes because it was new, something they could unwrap and scrunch up in the same way, something they could stain and flick away without a worry. Buying them with false identities and heavy layered masks with shadowed eyes and falsely crimsoned lips. And these too they would take to hidden places, the cherries of their tips red hot little eyes in the dark peering out. It was maybe these lights that drew attention to them.

You seen them two girls that are always in the arcade?
The little fit ones.
Yeah.
That dark haired one’s a right fittie.
I like the other one.

And it wasn’t long before it wasn’t just them, and others followed them into shadow, hid away with them, spoke with them in a language they had carried with them their entire lives but had only just learnt to speak, between the draws and the sips of whatever it was that was handed to them. Sometimes sweet, sometimes bitter, sometimes neither. Whatever it was it pulled them further away from the sun.

It ain’t right the way them two behave. They certainly are their mothers’ daughters, if what I’ve heard about them is right.
It is. They were worse than they are, but less sly. They just tore about like they wanted the whole world to know what they were.
Well, the apple don’t fall far from the tree.
That’s for sure.

Their eyes had always shone with a certain curiosity, something playful and innocent in those early days. But that curiosity was soon replaced with an apathy, and this too was learnt in the dark.

I hear one of them’s up the duff.
Int surprised.
I blame the dads for never being around.
I blame them little sluts.

It was shortly after this that the children of the sun weren’t seen anymore, but if you looked carefully enough, you might find a sign here and there, a faded old wrapper, a sugary thumbprint on a coke machine, but that could have been left by someone else at another time, a more recent time, another child born to the heat and warmth but left in the dark; the birds circling for when the time is right to swoop down and pick them apart.